Go back to Types

This is the most important chapter in this tutorial. Read it carefully :-)

Consider the following example sheet. It is taken from the domain of healthcare, and the E column calculates a (hypothetical) risk factor based on a person’s age (A), their weight (B) and their diastolic (C) and systolic (D) blood pressures.

You will notice several things. First, it would be nice if we could rename the columns according to what is contained in them (weight, age, diastolic, systolic); right now the spreadsheet language does not allow us to do that. But second, the way we handle the formula is really bad. The way we reference data ($lll) is not very readable, because the reference expresses navigation as opposed to expressing meaning (using the absolute references with $A2 etc. would not make it any better). And we repeat the formula in every line. This is really a problem: we might make a mistake copying it down the column, or we might accidentally change something in only one row, or we might want to update the expression consistently in all rows but then forget to update it in one of them. So, this kind of duplication of identical code is really bad.

Duplication of code is almost always considered bad, because of the resulting issues around code evolution and maintenance mentioned above. Lots of mechanisms in programming languages, and more generally, in software design and architecture, are aimed at removing this kind of duplication. We will see some of them in this tutorial.

From Cells with Dependencies to Parametrized Cells

In programming, whenever we want to get rid of (outgoing) references (or more generally, dependencies), we use the same proven approach: we create a new “box”, and then parametrize it:

As the picture above shows, the parameters sit at the boundary between the newly created box and its context, i.e., the rest of the program. A parameter is a named value, just like the vals shown in the previous chapter. But it is local to the box, i.e., it can be used for computations only inside that box. So, inside the box you put the expression, but you write it in terms of only those parameters. This way, all dependencies in the expression are local to the box. The box itself now has no dependencies on its context, there are no dependencies outgoing from the box.

The box can also pass values back to the calling context; this is expressed with the lighter shaded square in the picture. In general, the box might have any number of “out parameters”, but usually, there is only one. It is called the return value.

When you want to use the expression (for example, in all the locations where the original expression was copied before), you map values from that particular context to the parameters, you “bind” the box to a context. The crucial point is that in your program, you can have several such bindings, thereby using the box in different contexts. And the return value is the just the value to which the calling expression evaluates; it is different, of course, for each call. 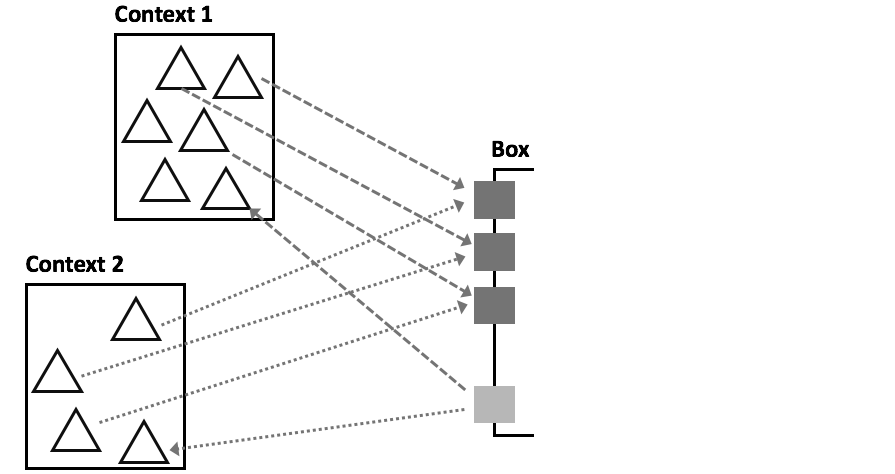 So let us look at an example with cells. In the sheet below, the blue cell labeled riskFactor at the very bottom is this box we were talking about. It declares the parameters (the comma-separated list in parentheses), and then the expression inside the riskFactor cell (below the line) refers only to these parameters.

The cells that formerly contained copies of the risk factor expression now simply refer to the riskFactor cell, providing specific values for the parameters; the mapping is by position, i.e., the first passed value will be mapped to the first parameter, and so on.

An alternative way of specifying that mapping would be to use names explicitly, as in riskFactor(weight=75, sys=100, ...) Now the order does not matter, and the code is perhaps easier to read because it is more explicit. But it also takes more space. Programmers usually prefer positional arguments, but there are some good uses for the explicit variant as well.

The importance of Types in Function Cells

Let us look more closely at the expression inside a function cell: it is completely independent of where and how it is called. Said differently, when writing that expression inside the function cell, we don’t yet know the particular values that might be bound to the parameters when it is called. But we make assumptions about the kinds, i.e., types, of values that can be passed into the function for it to work correctly. For example, in the riskFactor function cell above, we perform arithmetic computations with the parameters, so we implicitly assume that they are numbers. To make function cells robust, we have to make this assumption explicit, by specifying types for parameters. Once we have done this, the type checker will report errors if we try to call it with values that do not fit with the types.

The reason why the types were optional for the vals discussed earlier is that every val, right when it is declared, has to be given a value/expression (on the right side of the =). The type checker can then infer the type of the val from the type of that value. But parameters have no value; here, the types act as an explicit constraint on the kinds/types of values the caller can use.

The types are a simple form of a contract between the function cell and its callers: in this case, the function cell expresses an expectation to which the callers have to conform. We will see other forms of contracts later in this tutorial.

From Function Cells to Functions

Remember how we earlier moved the contents of cells into vals that live next to (independent from) sheets? We can do the same with function cells. Not surprisingly, these end up in what we call functions:

Have you spotted that the two last rows will result in type errors?

By default, a function is written with the keyword fun, followed by its name and the list of parameters, each with a type, enclosed in parentheses. The expression that implements the function, called the body, follows the equals sign. In terms of how it behaves, a function is identical to the function cells. In particular, they are called with exactly the same syntax.

In many cases, functions will do relatively complicated things and thus use more than a single, simple expression. Even the example above can be refactored to be more readable:

Here, we use a block expression {...} as the body of the function. A block can contain local values (also expressed with val) to represent the results of intermediate calculations. The values inside a block are only visible inside that block. This is a way of breaking down complex expressions without making these intermediate results visible to the program as a whole (as global vals would). The value of the overall block is then computed by the last expression in the block.

Another reason why the types for the parameters are mandatory is that otherwise the type checker cannot check the expression(s) in the body of the function. In contrast, the type of the value returned by the function is optional; if you don’t specify it, it is inferred from the body. But you can make it explicit, too; it is specified behind the argument list, separated, as usual, by a colon:

The notion of functions is ubiquitous. They are used all over the place. Sometimes they “hide” behind a slightly different syntax, all with their own trade-offs. But in terms of what they do and how they work, they are identical. In this section we look at some examples of alternative function syntax.

Operators: Remember 4 + 3? This can be interpreted as a function call to a function + with the arguments 4 and 3, and it could be written as +(4, 3). In some languages one can literally write this, often using names such as plus instead of the symbol +. A nested expression such as (4 + 3) / (10 * 2) would then be represented as div(plus(4, 3), mul(10, 2)). For various technical reasons, this notation is easy to process from the perspective of tools that process the program. But it is also quite obvious that this representation is not as readable for humans, which is why infix operators were introduced into all but very few languages. But in terms of semantics, operator use is just like function calls.

Dot Expressions: In many cases one uses a dot expression to invoke a function. Instead of writing fun(a, b, c), one writes a.fun(b, c). Usually the first argument naturally plays a special role compared to the others; for example, it might be a collection to which we add an element or it might be a more complex object, such as a Car, where we increaseTheSpeed() or something (we will talk about objects later). The advantage of this notation is that one starts the syntactic form with the first argument. So after one types a., the tool can propose to the user only those functions that are valid for a as the first argument. This is in contrast to the regular function call syntax fun(a, b, c), where the editor has no context; it will propose all functions defined in the system.

Natural Language: Going back to the riskFactor above, a call to the function might be hard to read: it’s essentially a list of numbers, and it is hard to remember which number maps to which argument. An alternative, better call syntax would be

Here, the function would be defined using a text template with embedded arguments:

If these text fragments become too long, readability suffers, but in general, this can be a good way of making the code more accessible to people who might only occasionally read code. We have also built systems where each user can switch between the regular, positional arguments and a text template.

Here is an example that wraps up everything we have learned so far: 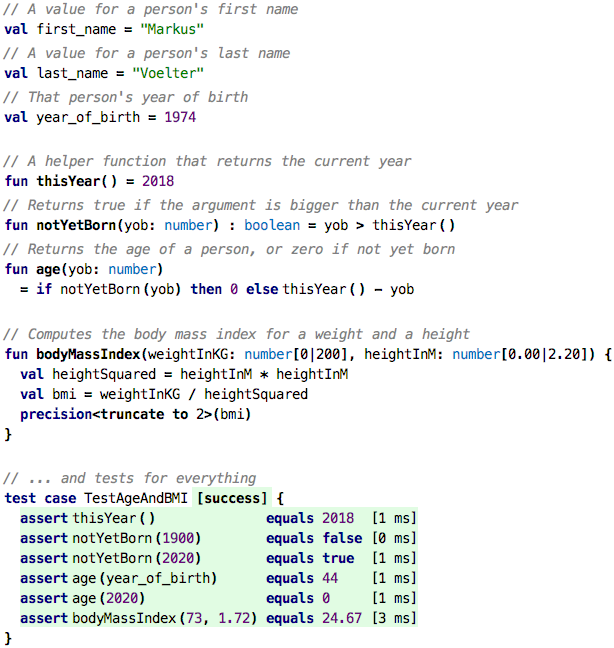 The only new language construct introduced in this example is the precision expression used at the end of the bodyMassIndex function. It can be used to change the number of decimal digits on number values. Remember that a division always returns results in a number with infinite decimal digits. Here we truncate it to two. Instead of truncating, round up and round down would also be available options.

If you really want to understand only the basic basics of programming, then this is the place to stop with this tutorial: values, expressions, types, functions and tests are the absolute essence without which you can’t do anything useful. On the other hand, if you’re comfortable so far, why not continue and learn more interesting things about programming.