Go back to Types

Remember the introductory example in the previous chapter?

I am sure you have since forgotten what the first four columns stood for. Let me remind you: the E column calculates a (hypothetical) risk factor based on a person’s age (A), their weight (B) and their diastolic (C) and systolic (D) blood pressures.

We identified two problems before: first, the columns don’t have useful names, so it is hard to remember – as I demonstrated above – what these stand for. Second, there is the problem of the expression in column E that is repeated five times. In the previous chapter we solved the latter issue through function cells and functions. In this chapter, we will solve the first issue.

To continue the argument: if you reread the paragraph before the last one, what is the word that is central to the story? Right, person. How is this concept represented in the spreadsheet? Or in the functions we defined in the previous chapter? Not at all. This is the core of the problem. What we need is a way of grouping data that belongs to, or is part of, a single entity.

Looking at the spreadsheet above, it is a classic “data table”: each row represents a record, and the columns (maybe except the last one with the function) represent fields, or members of that record. So let’s write this down as a first-class declaration:

A record is literally like a row in a database, the members of the record correspond to the columns; both are essentially typed names. A record is also a little bit similar to functions: the members correspond to a function’s arguments. So, not much fundamtenally new here.

However, conceptually we have done something important: we have created our own abstraction, the abstraction of a person in the context of our system. You might say: well, it’s not really a person if it doesn’t have a name and a date of birth. However, what is a person in the context of a particular system, i.e., how we abstract the real-world concept into software, is our decision. If we are interested in age, weight, and the blood pressure, then it is perfectly ok to define a person as having those specific fields. Other programmers, for other uses, might define a person differently. You can, of course, argue that we should not call it a Person, but rather a Patient. Or PatientData. Or DataForRiskFactorCalculation. All are valid. It depends on what you want to communicate to the reader of the program (because tools of course don’t care about names, as long as they are unique).

Record declarations like the one above can play the role of a type, similar to number, boolean or string. In contrast to those, however, they are not built into the language, they are defined by you, the programmer. With the Person declaration above, you have created a type that you can use like any other type. In particular, we can rewrite the riskFactor function that we have seen before:

The function now takes a whole Person as its only argument. Inside the function we can access the members of that person p using the dot notation. Remember that we had introduced it earlier as an alternative means of calling functions; now we use it to access members. This is why the dot operation is often also called the member access operation.

Remember our argument why the dot operation is useful to access things that belong to something else (like the members belonging to the record)? It is because you first write down the thing itself, and then, after the dot, the tool will only propose, through code completion, the things that belong to the thing on the left of the dot. The user experience, in terms of the tool’s ability to provide specific help, is improved. There is no fundamental technical reason why one can’t access the age of a person by writing age(p) (where p is a Person) but it is much less convenient.

We have said above that the spreadsheet can be seen as a kind of database where each row is a record. With what we now know about records, we have to phrase this a little bit more carefully. The proper way of saying this is that each row is an instance of a record type, where that record type defines the fields that all of the instances (rows) have. So the record defines the structure, the record instances define specific rows, where each row provides a value for each field/member of the record.

We have come across the notion of an instance before, even though we did not make this explicit: we have said that 7 has type type number, true is a boolean and Hello is an instance of the type string. So if <expr> has type T, we can also say that then <expr> is an instance of T. instanceof is essentially the same as has type. We wil discuss instances much more in Chapter 8.

So how can we create instances of user-defined records, such as the Person above? Here is how:

So, to create an instance of a record, you use the # symbol, the name of the record, and then values for the members, positionally, like in functions, but using curly braces (there is also a way of using the names of the members explicitly when creating instances; we’ll see that below. The trade-offs are the same as with functions). Once we have values of Person type, we can call the riskFactor function on them (and then, of course, write tests):

After you enter #, the tool directly gives you an empty template of the form #<type>{}. You can enter Person in the <type> slot and then proceed to enter the member values between the curlies.

Using the dot Notation for the Risk Factor

Going back to the sheet above, the E column contained the call to the riskFactor function. In some sense, the function was part of the record. Calling a function on a person, as in riskFactor(p1) is kind of ugly. It would be much nicer to be able to write p1.riskFactor(). The reasons why this is nice are

To make this possible, we have to make the riskFactor an extension function. Extension functions are identical to regular functions, except that they “extend” a type in the sense that you can call them with the first argument before the dot:

Remember the discussion about whether Person is a good name for the record we used so far in this chapter? Let’s resolve this issue by modeling that person/patient/blood pressure example a little bit more seriously. Take a look at this: 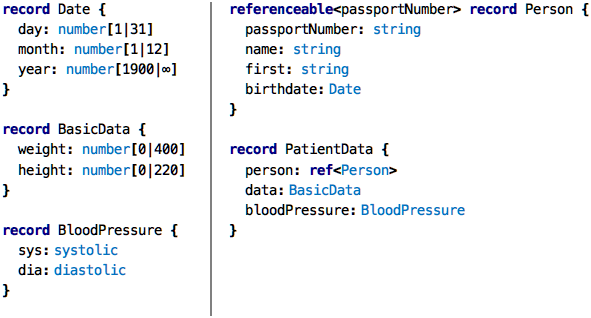 On the left we see a few plain records for Date, the BasicData of a person, and the two components of the BloodPressure. On the right, we see two more records. Here there’s something interesting. First the PatientData uses BloodPressure as the type of one of its members. It also uses the ref<Person> which is a reference. This is an important distinction! The regular use of a record type (in a member) represents composition. This means, that the respective ‘BloodPressure’ instance is owned by the referencing PatientData instance. A particular instance can only be owned by one other instance, and if that owning instance is deleted, the composed/owned instance is deleted as well. Essentially, composition creates a tree.

The relationship between PatientData and Person is different, it is a (non-composition) reference. Here, the target instance stands on its own, it is not owned by the referencing instance, and the lifecycles are not connected: if the instance of PatientData is deleted, the Person that was referenced by that particular PersonData continues to exist. The same instance can be referenced by several other instances. In the following diagram, boxes represent record instances, solid lines represent containment, and dotted lines represent references.

Here is an example using the records. We use the familiar # notation to create instances, and we use the .ref operator to retrieve a reference to a record, the Person in this case.

The # notation with its positional arguments can become hard to read for bigger models. This is why, as an alternative, there is the build expression. We can rewrite the code above as follows:

Here, the parameters are specified by name, and the representation is more tree-like. Additionally, once you write something like build<Person>, the tool directly pre-fills the necessary fields:

Let’s say we have the markusData in our hands. What can we do with it? Here are some tests that demonstrate some uses:

You can join multiple dot expressions together into what is then called a path expression. If you come across a reference (as in PatientData.person) you have to use .deref to get to the actual record instance from the reference. After a .deref you can continue the path expression if needed.

Closing the Loop with Spreadsheets

Of course, all of these expressions can be used in spreadsheets, if you so desire. There is one expression that is specifically built to work with records in spreadsheets: makeRecord, an example is shown in D0:

makeRecord constructs an instance of the record given between the angle brackets, by taking the values specified by the linear cell range given in between the square brackets.

The first thing we have to remember, from the very beginning of this tutorial, is that values never change. If we add 8 + 5 nothing ever happens to those two values; instead we produce a new value 13. In fact, the definition of what a value is relies on the fact that it never changes. And at least for now, we will stay with this definition. So what do we do about changing the blood pressure? Well, we create a new instance of the record with the changed diastolic pressure. So: 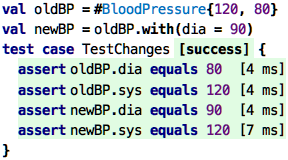 The with operation allows you to create a copy of the current record value, with one or more of the members changed. The original value, the one on which you called with, remains unchanged, as the test shows. Here is another example that changes a nested instance. You can see how we use the old keyword to refer to the value that is in the original value, the one on which we called with.

Why is this useful? Why don’t just actually change a member? The reason is that this means our programs do not have to deal with time! If we were to actually change a value, then we, as programmers, and all our tools, will have to track how a value changes over time. This makes everything more complicated. Sometimes this is in fact necessary, and we will cover changing, or mutable data later in the tutorial. But for now, we stick with immutable data.

Here is another reason. Imagine one part of the program, let’s say part S, hands a value to another part of the program R for it to do something with. Now, while R performs its work, that other part S of the program continues to run and modifies the value (i.e., different parts of the program run concurrently, at the same time). This would mean that from the perspective of the receiver R, the value changes on its own, spontaneously. This is really really bad for correctness of programs. If values can never change, this whole class of errors that can occur in concurrent programs are just impossible.

With records, composition and references you can describe essentially arbitrarily structured data. Together with functions to express behavior, this gets your knowledge about programming almost to a workable level. What’s missing is collections. We will discuss those next.